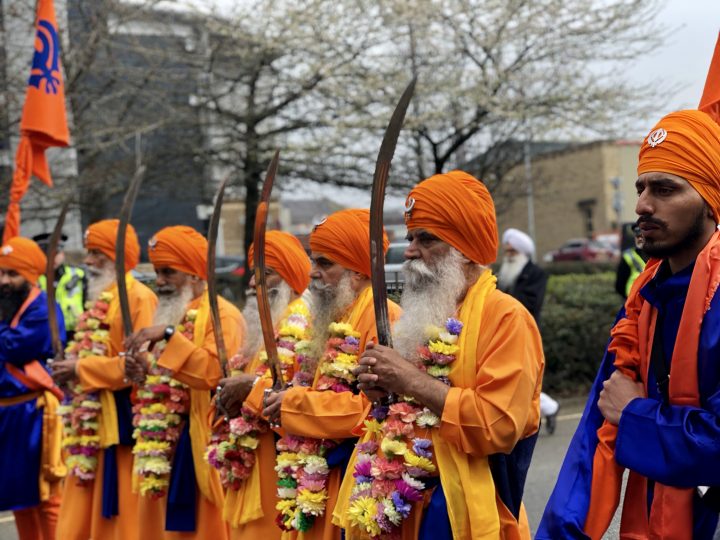 The annual Vaisakhi Nagar Kirtan was held on Sunday, 15th April, 2018 on the streets of Bradford. It brought together hundreds of members of the Sikh community. Dressed in vibrant colours and predominately orange, the traditional colour of the Khalsa, Sikhs of all ages enjoyed reciting kirtan, paath and sharing langar together. They were warmly welcomed at each Gurdwara with langar. The local police force, volunteer stewards and the St. John’s Ambulance Brigade ensured everyone’s safety and kept the procession moving.

A demonstration of Gatka (Sikh martial arts) was performed by young children and adults, dressed in traditional white and navy outfits at the start of the celebrations. Drumming on the Nagara, signalled the commencement of the Nagar Kirtan. It was led by the Panj Piyare (5 blessed ones), dressed in traditional orange and navy robes. A float with a canopy carried Guru Granth Sahib Ji (Sikhism’s holy scriptures), followed by the Sangat. It began at 10:30am at the Singh Sabha Gurdwara, in Grant Street.

Here are some pictures from the Nagar Kirtan – click on any picture to view as a slideshow.